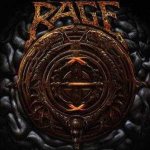 There I was striding to heaven and they were calling me from beyond and I heard: "Don't look back!"
But I did and my eyes, they can't forget that sight
‘cause all water and land was dead.

A giant maelstrom, absorbing what we'd left back,
the deserts of cadaverous, mortal loam
and jungles of decay and decadence, where once
had been the homelands of my people,
temples of my ancestors, they were gone, dead and gone

Then the cracks in the ground, they were breaking up
and all water was streaming in,
manifesting the sight of the dead Berlin and London and Paris were graves.