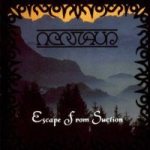 Album rating :  –
Votes :  0
9. Scars in flesh (6:21)
Sears in flesh they meant to be,
Furrowed pictures, escorts on journey,
Through stories written by life
Through heights and deeps into uncertainty

Puppets conducted by an iron hand
Are showing the social systems
A torrential flood around,
From their rapids there's no escape
Captured in this unending circle
Of schemes and deceit
A government of monotony

They often concern for a long term -
Impressions of frustrations
Important worthes tumble in ruin
In the chaos of a chainbelt
Growing pale in a livid light,
Marching in a lost battle -
Down into the final stage