The Valley of the Lost Souls Lyrics 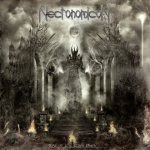 Album rating :  75 / 100
Votes :  1
7. The Valley of the Lost Souls
No sounds in the night flowers are flying in the wind
The black stone ageless, a monument stands in the valley
Symbol of power, a symbol of forgotten past
Venus dominates in the darkness of the sky
The virgin is wandering in the valley of the lost souls
Lost in her mind following an unknown voice
An ancient path she walks without knowing
Down in the valley on the way to the altar
Regaining consciousness she notice she is not alone
All around her now pale skin women's are standing
Bringing her to the altar, placing her on top
Frozen by fear she can't move or scream
Chanting rise in the night harms are raised in the air
Their heads turned to the sky it's joy appearing in their eyes
A star seem to be moving
A shadow is growing
Over her now passing
At the altar landing
Dark wings covering her
Fear is now over
She fully remember
She's a witch from this earth