The Signs Were True Lyrics 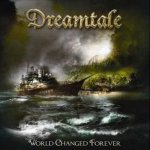 Dark and ugly - a storm cloud
Carrying men to our shore
The kind we've never seen before
Here we silently watch
They've taken one of us
It's the elder of the tribe
And they're holding him in chains...

All the signs he told were true - today we're not alone
The signs were true - there is another world
And so much more, than what we knew before
As now we're in the cold

The men go in through the gates
Like they own this grieving place
And one stern-looking soldier
Has betrayed on his face
Now a younger man appears
Tries to ease their rising fear
They're debating what to do
The old man said there would be two...

Fleeting peace once more lost
They've taken one of us
It's the elder of the tribe
Who foretold us of the signs...