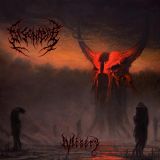 Album rating :  90 / 100
Votes :  2
3. Abominations Created Through Divinity
Disciples of the reverence
Growth of primitive hunger
Within the enlightened, impurity spreads
Throughout the followers a metamorphosis begins
Traits of the beast recognised

Canines sinking into holy flesh
This abomination, it feeds on human flesh

A demonic possession only cured by death
Their hunger is satisfied... only through literal eurachrist

Once messengers of the false, now entombed in their flesh

Blind followers of the trinity
Begins their carnivorous rampage upon themselves

Once messengers of the false, now entombed in their flesh
They reside in their world of misery