Field Of The Impaled Lyrics 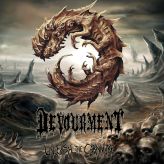 Forced through the anus smashing through internal organs
Splinters tearing tissue, ripping through the sinew gushing pus
Some were pulled with force, causing blood to shower the fertile ground
Some were left to slowly drift, inch by inch, day by day
Breathing while the stake would slowly pierce through their body
Feeling every ounce of ungodly pain, completely coherent

Day three's come, suffering taken to unreal heights
The spike emerged from the mouth, and the pig is stuck
Eyes forced up to watch the sky and the bloodstained tip
Forced in place to suffer as death slowly creeps in