Rites from the Past Lyrics 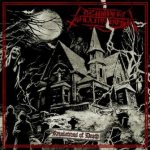 Once a man of christ, from centuries ago
Became a heretic for the other God
Different kind of highest power,
make him murder a human child
Innocent lamb was sacrificed
Slaughtered upon the altar
of the cursed mad man

But the killing of innocent was far from being done,
from different village, he took another child
The girl fate was different, because of her pretty smile
when a misterious stranger was passing by
As he later confess to the furious witchfinder
he found her little, ten years old vagina much tight
when he put there his whole hudge cursed arm
Evil was teared brutally from within apart,
with pain on her face and a fear in the eyes.
After the screams were over
He feasted upon her tender flesh,
it was a reward, his communion to the fallen one.
Gitl name was Mary like the mother of christ

And yet the slaughter was far from being done.
His satanic lust was growing, drove him more mad,
He reach the obscene and unhuman most bizzare acts.
He was living death, and a nightmareto all the god's child.
In the final moments, when he was caught
during the execution last preperation time,
He said: "Evil is in every man, Evil is in each of us"

Once a man of christ, from centuries ago
Became a heretic for the other God....