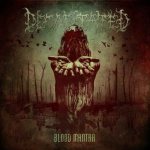 Album rating :  83.3 / 100
Votes :  9
3. Veins (5:04)
Marked as a "new human breed", with the face ripped from the amorphic body,
half breathing to not disturb this order.
Wired to a demo-god, upgrading the faith, downloading the holy soul-ware.
Saved or just safe?
Data flooding a weak brain, confused mind under mass media control,
submissively taking the nourishment until it pukes with cybernetic dope.

New age has come, shiny screens display the true world.
How many bytes are You worth?
You get a "sweet" and it does the trick.
Be a clown or get the throne through knowing "more"?

Mental extermination machines, pumping shit into the brains.
Global factories mass-producing the new kind of man.
The numbered model scalped of identity, steered and deafened.
I cut the wires, I wrestle with the veins.
Must disconnect!

Millions of clones, humanoidal folk, being bred and dying,
Suffering the same kind of dole.
Touching the throne, the invisible throne, are the kings of lethargy
chained to the fake crown.
Serving the gods, the digital gods, on the altar of stripped privacy.
Fucking system's sluts!