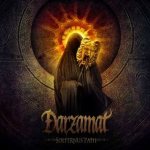 [He heard a dull thud. It seemed to come from the drawing room situated next to his bedroom. He dragged himself out of bed and put on his dressing gown. It was well past midnight. He heard the clock striking three. He quietly slipped into the room and saw only a shape imbued with a faint luminosity since it caught and reflected in its yellowed surfaces what little light there was in the ill-lit room. And then he saw a fragile figure, a girl, six - or maybe seven-year-old, sitting on a wooden swing attached to the oak ceiling. The girl was swinging rhythmically to and fro. She was the splitting image of the skeletal women he had met before in the house.]

[Mara: known in the Slavic as 'mora', a terrible night visitor that crushes or oppresses its victims, normally taking the shape of a beautiful woman or a truly hideous old hag. The Mara has close associations with vampires through its nocturnal predations and, in some areas, its fondness for blood. According to the southern Slavs, once the Mara drinks the blood of a man, she will fall in love with him, never leaving him and forever plaguing his slumbers. She also fond of sucking the breasts of children. A number of vampire species are classified as variations of the Mara: (amongst them the 'mora') who hold to be the wandering spirit of an unbaptized girl, eager to suffocate people.
Source: Matthew Bunson, The Vampire Encyclopedia.]