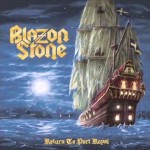 One last battle on the seas, when Robert Maynard chased him down
Devastating canon fire, turned the lieutenants ship to wreck
Closing in to fight by sword, a melee in the raging storm
The fight was on for not too long before the final breath of captain Blackbeard!