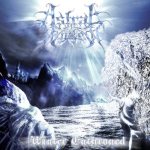 Album rating :  86.3 / 100
Votes :  8
6. Longing For Winter's End (6:23)
Forever the frozen thrones of winter will revive
and in their time they'll show the enterance of the frozen palace
Hidden beneath their artict walls laying secret to the seldom
exists an entity that will forever bring, winters end

To be awakened from the tomb of eternal ice and snow
A malevolent hymn must be uttered from the darkened ages
On a night of fading moons and death black skies
The frozen palace will free the beast, end of time

Longing for winters end, extinction rains from the skies
Frozen in times sagacity, Prisoners of our own mortality

The world is cast in shadows under the spell of eternal night
The oceans begin to seethe the forests burn like effigies
Creatures of darkness emancipated by the beast
The voice of anicent rites betrayed, confine this world to desolation

Longing for winters end, extinction rains from the skies
Frozen in times sagacity, Prisoners of our own mortality

The world is veiled in everlasting ice, remnants of life mystified in the storm
The beast returns to the frozen palace, a thousand winters entombed in slumber
Degradation of the summoned darkness, To the dust the creatures recoil
Santrificial motions of the wheels of time, the world ordained to a frozen embrace