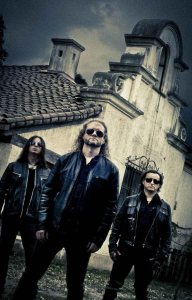 Additional notes
Formerly known as Pentagram, but they changed their name in May 2012 out of respect for the famous doom metal band Pentagram.

Pentagram was formed in 1985 by Anton Reisseneger (lead guitar/vocals) and Juan Pablo Uribe (bass). Inspired by bands like Venom, Slayer, and Possessed, they started their own brand of extreme metal in a time and place where the genre was in its very first steps.

With a couple of originals and some covers, Pentagram debuted as a trio on December 28, 1985 with Eduardo Topelberg from the band Chronos on session drums. The first gigs were disastrous mainly because of the little experience of the band and the lousy conditions in which they gigged.

Next year, they hired drummer Marcelo Ulloa, with whom they played exactly one gig. By then they had three original tunes ready and after hiring Topelberg as a permanent drummer they recorded their first demo on the first month of 1987 at Nacofon Studios with a very tight budget. Reisenneger did vocals and played bass and guitar, while Uribe played second guitar. The demo started spreading through the international underground tape trading circuit and people started taking notice. Next month Reisenneger traveled to Brazil with a friend, invited by Max Cavalera (Sepultura). Some label in Rio de Janeiro offered Anton a record contract, to which he accepted, but then never heard again from them.

After returning to Chile, the band met bass player Alfredo "El Bey" Peña, which entered the band replacing Uribe who opted to be second guitar player. That year (1987) people from their country started taking notice on them due to their powerful material and outrageous live shows. The now legendary Manuel Plaza gym in Santiago de Chile were the scenario for most of their gigs, usually on Metal Fests along other underground bands like Dorso, Rust, Caos, Necrosis and some others. Up to 1000 people packed the place on Pentagram's gigs.

On September of 1987 the band recorded their second demo, with little difference in sound but some improvements in the songwriting, like longer playing time and more intricate riffing on the songs. Again, it took the international underground by storm and the band made numerous fans all over the world. During that time, a former Celtic Frost roadie, "Dinosaur" Surocco, offered the guys the edition of a 7'' through underground Swiss label Chainsaw Murder Records. The idea materialized in the "Fatal Predictions" / "Demoniac Possession" single, which nowadays is regarded as a collector's item.

For various reasons, including the fact that no label in Chile or internationally wanted to sign them, Pentagram disbanded. The demos still were available through tape trading. In 2000, Picoroco Records released both demos on CD format along with a couple of live recordings that displayed the power of the band on a live setting. On 2001 the band reunited for one gig in which they played all the songs from the demos plus a couple covers and tunes that never got recorded: the hardcore song "Pigs" (inspired by the repressive Chilean police) and "Demented". The lineup included Reisenneger, Uribe, Topelberg and Cueto from Criminal doing bass duties since Peña passed away somewhere the initial split-up of Pentagram and the reunion.
Contributors to this artist