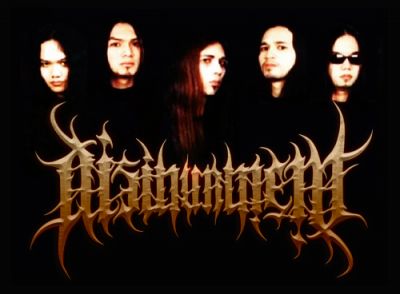 "Absolutely violent and ruthless tracks with furious and haunting riffs, pummeled with hard blasts and rammed with ferociously fathomless growls..."

‘Defiled Covenant’ was unleashed in 2003-2007, hauling it to the shores of New York, Florida and California with a special physical album release. Although the band have since gone with two more releases under Devoured Records, with ‘Demoniacal Dispel’ and ‘Domination Defied’ receiving physical releases stateside in 2004-2008, it's ‘Defiled Covenant’ that has really become a trademark of the band’s sound.

Originally written and composed throughout the late 1990's, the album wasn't recorded until 1999-2001. Built on eight tracks of solid and unrelenting death metal intensity, ‘Defiled Covenant’ howls and breaks free the chains of its genre. With song titles like 'Desecrated Remnants' and 'Desolate Damnation', they are darkly melodic and strangely calming in a spawning hellfire kind of way. Ruthless in its composition and surgically violent in its delivery, the album has a way of beating you into outright submission. 'Defiled Covenant' takes us musically on a fast paced, sightseeing tour of the 'Domain of the Damned'. It is just a very solid release, featured cover art of the highest caliber.

• Demoniacal Dispel: Written and composed in 1998-1999 by Disinterment; Tracks in the album are Depredated Daemons, Dispossessed, Dakilang Tribulasyon / Delubyong Propesiya, Demoniacal Dispel, Desouled Execution and Domain Of The Damned.