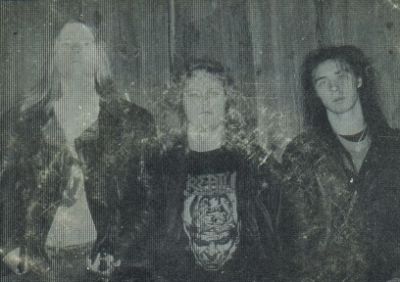 Additional notes
One of the first death metal bands to use two lead vocalists.

Belsebub only released two demos and one EP before disbanding.

From Belsebub's biography during "Lord of Lucast" demo times: Belsebub was founded in the summer of 1990 by Stevo (Toxaemia), Jonny and Fredrik (Salvation). The band was meant to be a hobby band, but later everything went better than they thought. They had some company of Gusten (Drugstore) and he was only in the band for 3-4 months, but then he quit and was replaced by Mika (Morbidity). What the band made during the time they have been together is a demo called "Lord of Lucast" and it contains 8 fast, brutal death/grind tracks with brutal and screamy vocals. The influence is mostly from the Florida and N.Y. scene. The future plans for the band is to get well known in the underground and release anything on vinyl.
Kingdom
Album Reviews
Album Comments
Track Ratings
Album Photos
Lists
Lyrics
Artist Photos
Kingdom Polls
Advanced Search
Info / Statistics
Notice
Users : 17,550
Site Status
Online
Artists : 39,158
Reviews : 9,326
Albums : 141,524
Lyrics : 189,295
The Best Metal Albums of 2008
1.
Avantasia – The Scarecrow
2.
Lifelover – Konkurs
3.
Theocracy – Mirror of Souls
4.
Opeth – Watershed
5.
Seventh Wonder – Mercy Falls
6.
Krisiun – Southern Storm
7.
Amon Amarth – Twilight of the Thunder God
8.
Between the Buried and Me – Colors Live  [Live]
9.
Revenge – Infiltration.Downfall.Death
10.
Equilibrium – Sagas