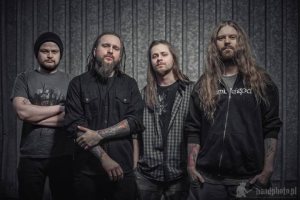 Best Decapitated Songs (10)
Additional notes
When first formed, the age of the band members ranged from 12 (Vitek) to 16 (multiple other members).

On October 29th 2007, whilst traveling to a show in Gomel, Belarus, the band were involved in an automobile accident. Their tour bus collided with a truck carrying wood, injuring Vitek and Covan seriously. On November 2, 2007, Witold "Vitek" Kieltyka was declared dead due to injuries sustained from the bus accident. Currently, Covan is still recovering from his head injuries. It is still unknown if he will make a full recovery.

Since the band were without a permanent bass player at the time, Vogg was left as the only member of Decapitated. He temporarily joined Vader in 2008, but later that year decided to reactivate Decapitated. The band finally reformed in 2009 with three new members.

Jacek Hiro was only a live guitarist for Decapitated, hence his omission from the promotional pictures for "The Negation".