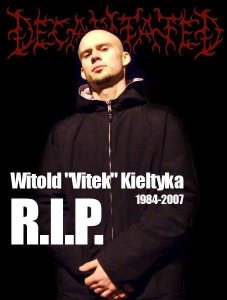 On October 29, 2007, while traveling to a show in Gomel, Belarus, Decapitated and the other band that was on the tour bus, Crionics, were involved in a bus accident. The tour bus collided with a truck carrying wood, causing serious head injuries to both Kiełtyka and Adrian Kowanek.

The two were taken to a hospital in Novozybkov, Russia. While Kiełtyka's family released a statement on November 1, 2007, saying that his condition had improved, he underwent trepanation and was due to be transported to a hospital in Kraków, Poland, for further treatment. However, Kiełtyka died on November 2, 2007, at the age of 23.