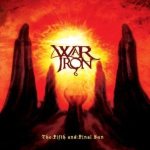 Thirteen forty three, beheaded, the scaffold
Fifteen found him guilty, treason, against the crown
Glint of the blade, the axe, of justice
Head on a spike, paraded, a warning

Red sails in the wind, her axes butcher many
Four hundred lie dead, by her own hand
Lioness of Brittany, scours the channel
Aristocracy, severed heads and blood

The Fifth and Final Sun - Lyrics