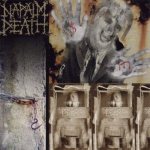 Sniff out a/ scheme/ and leave the scraps behind
Voracious, insatiable? A nose attuned to greed

Disguises are many
Media pawn or man on the street

Enemy of the Music Business - Lyrics