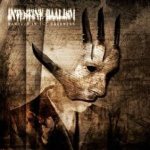 Album rating :  90 / 100
Votes :  1
4. The Genuine Tone (4:46)
An aria echoes like a wolf's howl
Growing, rising it leads itself to ecstatic madness
The genuine tone of the name with a great power
Strong words backed by our will

Vibration, it affects everything it touches
Free the force that controls anything in the universe
Inside the magic square various names vibrate
The force called up is ejected into the universe

Banquet in the Darkness - Lyrics