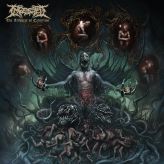 Album rating :  80 / 100
Votes :  6
7. A Nightmare Incarnate (3:37)
Track rating :  90 / 100       Votes :  2       [ Rating detail ]
gods and men you'll die the same
you bastards cannot touch me
ones that I admire thrown on the fire
none above us
motherfuckers in your shame
adorned in flames as I would see fit
you will know my name but you will not dare speak it
lashing them, I'm crashing them and smashing them
no submission, ammunition, I'm blasting them, surpassing them
none shall live through death, I'll give this gift of dominance
tyrant, enslaved afraid you bathe in all my opulence
sycophant, a self-servile serpentile bastard
liars, betrayers, the snakes in the grass
a book open wide reading pages of glass
translucent transparent but never opaque
you're fake now, you're fucked now, you know what's at stake
you're vile and I'm vicious proved all my suspicions
surprise in the eyes of denied opposition
improve my position, above competition
adored yet abhorred in this morgue of submission
atrocious agenda, dommander, defender, engrossd in my splendour
death before surrender
I am the one, the one that hides in plain sight, the wolf in sheep's clothing
I am the one you fear, you would never see me coming, that's clear
I have become more than what you thought was possible
shit that streams from your mouth
I am cancerous, venomous, psychopatich focus
murderous creature of habit
seduction so seamless, my servants are left dreamless
a nightmare incarnate, formulate my own fate
cast out, crushed and cursed I'm the best of the worst
but what is it worth to rule as a god in a kingdom of shit
and I'll destroy every single one of you motherfuckers
no one above us, you can't touch us, the slam butchers
immortal structures, your image ruptured, now stitch the suture
vile vultures a rotting carcass, cannibal culture
I'll show my enemies remedies through my weaponry
demonic entity, devoid of empathy
full force intensity, ecstasy through extremity
carve out my legacy, through my supremacy

The Architect of Extinction - Lyrics