Dig into Yourself Lyrics 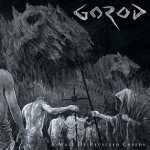 But what is more attractive than becoming a Magus or a Fairy?
How to give meaning to one's own life when one feels good for nothing?
Those of your kind know how to give false praise
In the process of indoctrination

In the scheme of self-glorification
You couldn't resist this inclination:
Overusing random and puzzling patterns
To please the reckless ones

Who can lead a life on ready-made principles?
Who can be satisfied with a ready-made truth?
A ready-made reality!
Swimming with the tide...