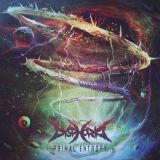 Album rating :  –
Votes :  0
1. Faux Purpose (4:13)
How many lives have been saved due to humanity's working on a new postwar concept of slashing the conflicts amount, but who knows how many living creatures shall be demolished in the rising extremist flames?
Our history testifies there is no place for the mercy in darkened mind of humanity as we march through perennial war kaleidoscope for the purpose that rots.
From wooden sticks to the nuclear bomb, we are constantly improving our skills of self-extinction.
Starting right from the Stone Age to almost full mechanization, society has been developing the means to put an end to those out of favour – angered starving population, weak nation on the other end of border, presumptuous enemy dreaming of your own end in its sleep.
We despise creation as a nature's hint. Writing our own scenario on human's evolution, we become pithecanthropus in the environment of feigned welfare.
What you may see in a distorted social mirror is the reflection of the absurd when children of iniquity, disfigured and blinded by sophisticated ideology, use false science to establish destruction instruments effective in their stultifying principles of mass annihilation.
Feels like human species spends countless days of its miserable life waiting and being afraid of wrath of nonexistent god - the embodiment of mental cancer.
There is no heaven, we've got only a hell here.
Our shivering hands are lavishly stained with blood of human kind's creations.
The only product of nature's mortals is Hell we all set our hands to.
This meaningless trail shall inevitably lead our race to bitter end promising tortures and sorrow until the last of man draws its final breath.
Audio