The Blood of Power Lyrics 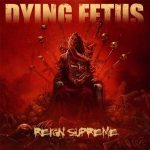 Financial enticement right to access
No alternative 'til it's gone
Proxy battlefield, resupplied
With the means to strike down abruptly
All attrition comes from above
Inflexile directives bound to

With the foothold, still in the game
Posturing rivals, one in the same
Necessary actions breed hostility

The new reserves, the ocean floor front line
The future uncertain, submerged technology
Progressing forth, into the unknown