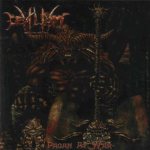 Album rating :  80 / 100
Votes :  2
5. Human Meat
It could be a hybrid of animal life forms
Zard Nofhilief mutated
Lurking the night haze in search for human preys
Covered with scales and hairs
Covered with gore and dead smell
Monster insane, get of a toxic demigod
Lost in a realm he doesn't comprehend
His path is absurd but in no way worthless
Here down terror has found his place
Maybe got human cells maybe
Walking like a gigantic zombie around the village
Hunting solo beast
You think he's the monster of the story ?
He's not for his path is clear : instinct, destiny
He is the angel devourer
He hunts now around the cities, living his quest of hate
Against humanity, vengeance, destiny
Bless of the angel devourer.
Born from your wastes he takes back the life he never had
From a chemical absu it comes and to it he will return with you
Mankind against reality fucking angry with your reality!
Angel devourer
Soon he'll have erased out type
He's the saver, he's the beast
From toxic wastes we did involve him
Through the gates opened by science
Now chaos enters back !