Catacombs of the Monolith Lyrics 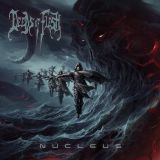 Album rating :  77.5 / 100
Votes :  2
4. Catacombs of the Monolith (5:07)
Within the vast realms of the perpetual expanse
Lying in the abyss of swirling decaying stars
Woven into the web of the astral fabric... concealed
in primordial dust of cosmic nebula
Caliginous devourer of civilizations
An inescapable prison that is cloaked and circling
Adrift the stellar corpses reveal the harvest moon
A frozen and barren terrain crosscut by narrow fractures
Clouded landscapes laden in debris of planetary detritus
Erupting geysers enshroud in sheets of ice
Herein lies the origin
Of the psionic stealers
With the destruction of Earth's harvest temples
By the Xeno-Virus Monsters
New psionic temples were formed off planet
Hidden and horrible once more
The secrets of the cosmos are revealed...suffering humanity's great mutation
Vessels of life encapsulated...disposable sources for Virvum
Monumental structures erected by sources unknown
Proves to be of an advanced technology
Tentacles of machines pull life from weakened beings
Antiquated pillars Inscribed with alien hieroglyphic symbols
Depiction of their liturgy for a higher distinction and purpose
Giant catacombs siphoning the lifeforce of the remaining
Temples for the process of entity blanking
Ravaging corruption to prolong their own existence
Within the catacombs of the monolith
Hide the secrets and the fate of mankind
Within the catacombs of the monolith
Strange machines rip the life from
From human beings
Procedural deeds persistent as they are ominous
With the purpose to strip the body of all essence within