Chambers of the Waiting Blind Lyrics 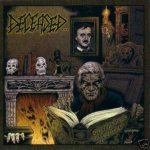 Album rating :  85 / 100
Votes :  3
7. Chambers of the Waiting Blind (7:50)
Track rating :  82.5 / 100       Votes :  2       [ Rating detail ]
The elders live to die getting old amongst their kind,
In a home their share affliction one and all,
They have no sight for they are blind but they see the constant lies,
And deceptive schemes that seem to never end,
For this "place" is run by power and a forceful greedy hand,
Whose way of caring for the needy isn't right,
For the sheets as thin as paper do not warm their freezing bones,
Hear them rattle trying to sleep in frigid night,
So the anger keeps on building as they plot to stop the pain,
On this nail that's sticking deep within their side,
And they all join together there's a creepy walk amongst them,
That tells in time they'll find their vigilance....
Revenge!

A room has been constructed for this outcast to commit,
And with trickery they have not been denied,

For locked behind four walls is the master of the pain,
Who's now trapped inside their morbid lair,

But what is on their mind what sort of horror will we find?
Down within the chambers of the waiting blind,

Six days and still they starve him as they offer mercy none,
For the hate it brews within them from his past,
In his body there is panic as he senses dread approaching,
He starts screaming for this torture ride to end,

They have taken more than enough and now the light is shining,
To bring to them a fitting dark revenge, dark revenge!

Then at once the room is open and the man quickly reacts,
Out the door he goes in search of those to pay,
But with a shock he finds around him that the walls are full of razors,
That rip at him with sharpened, striking blades,
He completes this trap alive but his eyes grow wide in horror,
For a dog sits starved and rabid for his throat,
So he turns back to the razors ans the lights to black they fade,
Like the blind he's now alone and in the dark,
The dark! The dark! He's now alone and helpless in the dark,
And the blind they stand the victor as the dog and man lay dead,
Their haunting laughter sounds their morbid victory,