Dying Water Walk With Us Lyrics 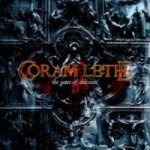 Album rating :  95 / 100
Votes :  1
3. Dying Water Walk With Us (06:14)
Track rating :  100 / 100       Votes :  1       [ Rating detail ]
The beast is coming, nothing can stop it
it devours and destroys, tracing death
has travelled through time always with us
invisible and deadly, is a part of us...
A sinister premonition, as in a mirror,
you look into your eyes but your eyes don't look back...
The last wave of grey silence
killing shadows on cross of blood
while my body's walking (screaming)
dying water walk with us...
It's like a roar, a divine collision,
the earth breaks open, breath vanishes
the worst of nightmares the skin that burns,
fleeing angels as from themselves...
Through persecution of the being
until symbiosis with light
the conscience of earth-children is troubled
but from their hands only pain...
The human flame isn't lit for long
but sun is dry for whoever possesses
The weeping mother, the infinity is spent
just a desert, a new dwelling place.
The beast is alive, is hungry for slaves,
raging murder, crushes onto us
or maybe it is us in constant descent
it's our journey, its aim, nothing!

The Gates of Oblivion - Lyrics