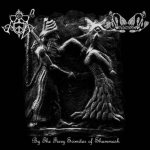 From the deep he arose, the waters have come to life
Nothing to one, the universe has come to rise
From the primal waters, he fashioned Tiamat, his divine wife
In due time she bore the first gods, each in their due time.....

Aeons drifted by, onward across the seas of time
The wandering destinies, consternation evocation
In time their son came to be, Lord Anu, supreme destiny
Over many more ages, Nudimmud, first born son came to be

The lord of magick has come to life
Stronger may it grow over time.

Even more Aeons rolled onward, without a created destiny
Wandering back and forth, consternation growing in the belly of the mother
Their rebellious ways, perceived by Mummu Tiamat
The ascending of Apsu, to smite his rebelling children

The spells Apsu cast were extinguished
Sorcery of the Elder kind, the first deicide

The corpse of Apsu, became the abode of Nudimmud
The lord of magick, took in those ancient waters, source of all life
Mummu Tiamat, sensing something was amiss
Drifted back and forth, growing fury within

Her eyes were inflamed, vengeful nature in her gaze
She shrieked into the dark void, howl of a thousand deaths
Before her she called a legion into existence
Monsters of the ancient kind, primal in every light

The Viper, the Dragon, and the Winged Bull
The great Lion, The Mad-God and Scorpion Man
Mighty rabid Demons, Feathered Serpents and the Horse-man
Armed with weapons of sorcery and strength, divine cast

She then put Kingu in command of the legion, general of her divine army
The Tablets of Destiny were placed upon his chest
Word got back to the Elder Gods of their mothers intent
Time to summon a great warrior, from the infinite deep....

Enki, knowing the graveness of the matter
Sent a calling out to the furthest deep
Summoning from afar his son Marduk
To do battle with the Ancient cast, attack!

Enki armed his son with magick divine
A secret number, a secret name and a secret shape
With the disk of power he told his son,
Marduk, to meet Kingu in battle, ride his chariot of flame

A shout of might into the cosmos, Marduk sent shockwaves across the plane
The monsters of Tiamat's creation fell down and dead, away
All who remained was the mother Tiamat, alone among her wastes
She lunged at Marduk, poisonous gaze

With the disk of power she was put down and weak
Heaving a howling, splitting the boundaries of time and space
With a shout of a mighty spell Marduk subdued the mother
With a shot of the divine arrow her animation became undone....

By the Fiery Scimitar of Shammash - Lyrics