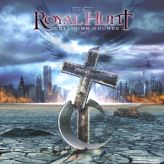 "From now on one icon leaves no room for others"

So now we're back - a single face in every corner, showing holy grace,
demanding bigger palace - worth the king
We're working hard to build it right, we're slaving every day and every night,
just dying to complete this bloody thing

Higher, higher... we can't stop. The tower's getting higher

Build a perfect house of light on our flesh and bones
to keep a sacred image under lock and key, but
every single dream we had kept ending in the mud
when we replaced religion with the rock...
the very first mistake - a simple rock.

Inferior gods must be gone... tomorrow there'll be only one.