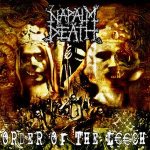 Thatcher, Reagan, Bush - that's one three-headed beast
It's the loathing behind the eys

And when those eyes conceal the zealot
Whiter than white, but the robots buy it
They clap and cheer

Kudos to bask in the belly of the beast

Not my president
Nor his fellow sham - the charlatan
Media mouthpiece screams "dignity!"
Glaring irony - this is news to me

Order of the Leech - Lyrics