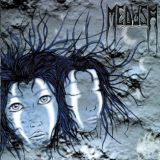 Album rating :  –
Votes :  0
14. Authority (3:06)
Down the highest white peak of mountain,
Shadows mix with battle.
The show consumes the air to bloom.
Thy fight between two masters,
Will open the way of the century.

Everywhere lightning explodes.
Masters of elements improve,
Their own wondrous magic,
Their own control of reality,
In a kaleidoscope of energy.

Nature steps back from the arena,
Gladiators draw spirits from the skies.

It's the end of evolution,
The scar of devil temptation.
Lost in spirit maelstrom,
Gods don't notice people suffering,
Poisoned by the frost of impotence.

Masters of elements,
Defeat the ends of logic.
A king will die in this fight.
Although the black tyrant relent,
The messiah must fall, the messiah must die.

The vibrations of history,
Are only an echo of wilderness.