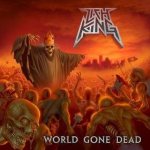 Album rating :  –
Votes :  0
10. Lich King III (World Gone Dead) (5:59)
Regent rules over fields of fire
Planes have been conquered and razed
Part the mists to find the one time remaining,
That one last uncivilized place

The place is here and the time is now
and the earth is the pearl that he craves
Flash into existence with his legions of scum,
fierce soldiers he called from the grave

Grab... your gun...
and guard... your home
World... gone dead...
There's no... more government, nations, diplomacy, peace, there is only the master of bone

All hail the Lich King

Boston is first of the cities to go
And the undead sweep west like a plague
Bombers, artillery, infantry, tanks
go to war with the wretched awake

Can... not fight...
The hordes... of ghouls...
World... gone dead...
So fire... your missiles and rockets and lasers and rail guns, but nothing will shorten his rule

All hail the Lich King

Air strike is called in and payloads are dropped
Mushroom cloud is a fountain of ash
Standing at ground zero, tall and unbroken
He raises his sword and he laughs

Man... has failed...
and earth... glows red
Bomb... sustains...
The king... he feeds on the nuclear fire and chaos and channels it into his world... this world gone dead