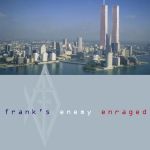 Album rating :  –
Votes :  0
1. Enraged (2:55)
There's going to be no more boredom I'm going to cut my hair
After the men, women and children falling through the air
The monsters have landed on Maple Street
The lynch mobs marching off to their defeat
If I was young I would sign up for a gun
And as it is I might just go out and buy one
Now I can understand I could just kill a man
After sending in bombs to flatten his land

We never knew a life of faith never toughed it out
Now we're going to find out what's it's all about
Looking everywhere in the water in the air
The next shot is coming but from where?
You hold a gun at my kid's head and what am I to do?
Could I wear a peace sign and to myself be true?
Oh, let the Mount of Olives tear and Wormwood poison from the air Don't mind me don't give me a care

"Allah" is crying as He looks down upon it all
The bridges between us will be the first to fall
Should the government have not stuck our nose everywhere?
Yes I think so but it's too late to go elsewhere
Now we're committed blood flowing on our soil
Now we've been dragged back in like Michael Corleone
And I ask the peace movement where did you go?
When Clinton sent bombers into Kosovo

For all the terrorizing I'm not too terrified
I mourn for the loss of innocent lives
I should have mourned before, our bombers filled their skies
When it was none of our business when they were out of our lives
But the lives of the guilty are there to be taken
Striking precisely with an aim unshaken
Let the computers point let the satellites fly
Let technology shield the homeland sky