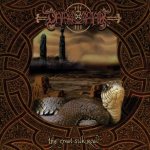 Album rating :  88 / 100
Votes :  1
4. Kara-Oy (18:48)
That was where fire's spirit was playing the flute this warm evening.
That world where Shaitan plays, to the accompaniment of the bugle drums bit.
Blood, honey and milk ‒ nectar of shaman's immortality.
Here the archers throw their whistling.

And may be this is a ringing of drops.
Because of straining spring's drops.
And may be it's a throne of consciousness,
Which put an end to all the ways before,
With silent murmurs of crystals.

Kara Oy ran across the black fields,
A river-bed is dried up on the land of Kara Oy.
The wind blows from the East to the West.
The birds fly to the East of Kara Oy.

It will wake a dog sleeping on feet.
The moon will rise like a poppy,
Instead of the light versal palace's imprisonment.
Then gods came down to me from the heavens
They'll look into my mind and fill me by eternal energy.
Surrounded by this magic light, sweat covers my skin.
Emptiness under my feet is calling me down.
Air tolls in my ears.
The night will swallow the day.
That dream today, I have waited for him… for a long long time:
Forever I'll stay in the Kara Oy.