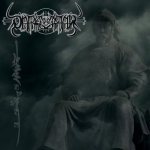 The dust was swirling, the steppe was restless,
Piles of strange corpses could be seen
Under the snowdrifts,
In the unseen space.

There, where the shore was glaring,
Where you can't see the road in darkness,
Mongol dressed in silver furs has spoken :
"We will flood the earth with blood, all the steppes and all the meadows."

He was riding hard, crossing the landscape
Of the scorched earth,
And everywhere in the steppes the name was resounding : the Great
Genghis Khan.

The dust was swirling, the steppe was restless,
The columns of warriors were marching afar,
And the wind waving the banners
Whispered softly into their ears
That many years ago
On the grey-yellow shore of Onon...

"Lord of the Blue Sky, Great Tengri!
I bow before you.
Give me the strenght.
Mongols need laws. I will make them obey...
...Even if I have to kill half of them.
Our laws will be simple.
Don't kill women or children.
Don't forget your debts.
Fight enemies to the end.
And never betray your Khan."

A forlorn child was standing
Over the body of his dead father.
How a youth put into socks
Was lagging through the snow clad earth,
About the nameless distant lake
Where Temudgin died and Genghis Khan was reborn.
Genghis, Genghis, Genghis Khan.