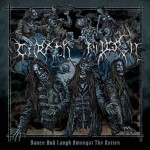 Album rating :  72.5 / 100
Votes :  2
9. Three Times Thunder Strikes (5:19)
Scrambling for matches
Determined to burn it to ashes
She threw the Ouija board to the flames and kneeled to pray

“I wish I never ever -ever- listened to my friends
Who had said it would be fun to play
Now the one that follows me
A predator, and me its new prey”

Cloaked by a shroud of darkness
Resurrecting forces she could never ever understand
That seemingly innocent game, now chanting

“Charlie - Charlie’s not a friend”

No sleep, no peace, but – fear
Forever caged in a ghostly sphere
Unblessed by a violent host
Possessed by a virulent ghost
A visceral rumble shakes the house to its core
and jagged cracks cut through walls and the floor
Three times thunder strikes, a blinding bright white
Shattering windows, inverting the night
Between the chaos now spread throughout
She desperately cries out loud:

“I beg of you Charlie, release me from this"
Unchain me from the depths of the abyss"

No sleep, no peace, but – fear
Forever caged in a ghostly sphere
Unblessed by a violent host
Possessed by a virulent ghost

One month ago, she uncovered an artefact
A strange casket like an alien tesseract

“Thou Shalt Not Open” inscribed in blood where it locks
Yet in her ignorance she opened this pitch-black box
Unleashing Charlie, a force vengeful and strong
Did you open the box before hearing this song?

Dance and Laugh Amongst the Rotten - Lyrics