They Must Die Screaming Lyrics 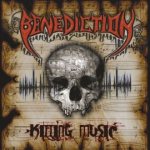 Following in the footsteps
In the wrecking trail of the elusive witch
Effigies submerged in gore
With a headless beast for opposing the hitch
Sworn to Kadiempembe
An obsession with evil carved in flesh
Ritually cicatrised screaming
My soul is dead, I have no god

But the shadow god has stumbled
Sorcerous facade now implode at once
Though the castellations crumble
The godfather will not be dead for long...