Stoned to the Grave Lyrics 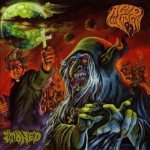 Album rating :  75 / 100
Votes :  2
8. Stoned to the Grave (5:36)
Shunned out in the street, like a horrid wretched dog
Townsfolk castigate you, say your hair is far too long
Denim and black leather shroud you, shining with such filth
To deflect the stones they fling at you, their glances set to kill

Metal, punk, comic books, and horror vhs
Nothing else to live for so you might as well obsess
Discovering books of power on the arcane and occult
Eating psilocybin leaves you feeling quite possessed

Those bastards quote the bible, to tell you how to live
You read the Book of Eibon and the Necronomicon
Tired of being treated like a leper and pariah
and in those books of power you find a new messiah

You read a sordid tale about the wicked blood queen master
The words on yellowed paper make your heart pump a little faster
She was said to haunt the hills of the land which you were born
A bent and haggard crone, defiled and thus deformed
She'd lure away the towns children, through the woods, into the cave
Preserve them in the swamps in their shallow water graves
Adepts and fools who sought her, she'd drug and make her slaves
and curse the pregnant woman with foul rodent babes

Her woeful tale stirs your heart, and strikes a chord of doom
Her sigils and her spells make perfect sense to you
Reading on you learn about her sad and lonely fate
Hunted by the townsfolk- to this you can relate
They tied her to the stake and they stoned her with large rocks
Watched her in her misery, they all did point and mock
And so she met her end, the psychedelic bitch
The foul foetid beldame, the horrific Acid Witch

She was stoned... to the grave!

So now alone within your room, a shadow stirs and looms
Your turntable's spinning backwards, the needles grinding through the grooves
A malignant cackle echoes, from the speakers vomit spews
Load the bong, spark the flame, inhaling of the fumes
The ceiling starts to bend and warp, it smells of unearthed tomb
Violet light envelops everything, the trip begins for you

You are stoned....to the grave!