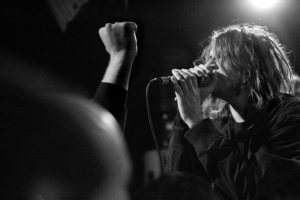 Additional notes
Mike Williams is a musician and poet/writer from New Orleans, Louisiana. He is most known as the vocalist for the NOLA Sludge metal band, Eyehategod. In 2005, he released a book of poems and lyrics entitled "Cancer As a Social Activity: Affirmations of World's End". He is also involved in another project with fellow Eyehategod members (except Jim Bower), called Outlaw Order. In 2006 he created a hardcore punk band called Arson Anthem with Phil Anselmo and Hank Williams III.

In 2009 he formed a noise/punk/power electronics project called "The Guilt Øf..." (http://www.myspace.com/theguiltof).

In the mid 90's Mike was an associate editor for Metal Maniacs magazine.

He has always suffered from asthma.

When Hurricane Katrina hit New Orleans in 2005, Williams was at his home in the Lower Garden District. A few hours after the power went out, he did have access to a battery powered radio and was able to listen to announcements about how bad the situation was in New Orleans. After the storm, the water subsided in Williams neighborhood, but the crime and violence was so bad that police could not help anyone in the area. They heard gunshots in the area regularly, and Williams' partner was involved in an attempted robbery that Williams managed to intervene and no one was harmed. In order to escape the violence he slept at a friend's apartment until he decided to borrow a car and go to Morgan City. He was informed there that his house had burned down. He booked a hotel room in Morgan City with his partner. The person who booked them called the police for unknown reasons. Members of the police entered the room and arrested him for drug possession. His bail was set at $150,000. His lawyer failed to get the bail reduced because the court felt he was a threat to society. Phil Anselmo eventually paid his bail, and he spent several months at Anselmo's home after. Before the hurricane, Mike had struggled for many years with drug addiction. By the time the hurricane hit, he stopped using heroin and was on methadone. During his stay in prison, he did not have access to methadone and had trouble sleeping for many days. He hardly ate for several days and just soaked bread in water and swallowed it to keep something down, but he did manage to kick his addiction to opiates after this incident.