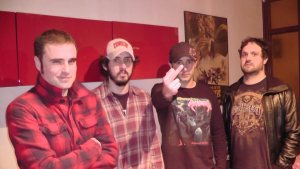 Additional notes
Gruesome Stuff Relish is an underground death/grind band from Spain who play a fusion of early 90's old-school Swedish death metal (see Carnage or Dismember) and the splatter/gore sound and feel of Impetigo and Necrony. The band's concept revolves around their extreme love for the classic Italian horror films from the 60's, 70's and 80's. Giallo films, cannibals, zombies, and other lurid tales of terror.

The band was formed from members of early 90's death metal band Repugnance and recorded their first demo in 2001 (which later became a split CD with Holland's Brutality Reigns Supreme). On the strength of this release, the band then released their debut album on Razorback Records in 2002 titled "Teenage Giallo Grind".

In 2003 and 2004, the band released some various split CDs and also the "Last Men In Gore" CD (Motosierra Records) that collected the tracks from the demo/BRS split CD, the never released "Last Men Alive" EP, and 5 unreleased tracks recorded in early 2003.