A simple maid, but oh so brave,
believed the stories told
And so she left, went on a journey on the seas

After many years of sailing for and wide,
it seemed so far away
but now her fate was sealed
She went ashore and found a cave
A light of steel appeared
She took the sword
She raised it high towards the sky 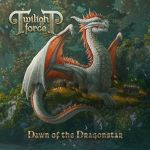