Death of the Sun Lyrics 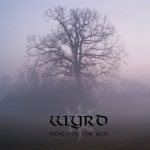 i have seen the world through vultures eyes
from the highest of places, in the deepest of nights
all the earth in my perception
the past and future as one conception

i have run the trail as a wolf, as a ghoul
as cold as grave, as fierce as a flame
i have howled its hunger and sunken my teeth
to the ribcage of life and reality

i have known the world in all its emptiness
i have seen beginning and ends, so meaningless
the individual tragedies
and grandscale catastrophies

i have lived a million finales
each dying wish i have heard
i have thrived in the decay of cultures
as a god, as a man, in the blazing inferno

death of a planet
is the birth of a star
fire and blood, the rise and the fall
on the first day i will swallow the sun
and shine in utter darkness
i am the death of the sun
i am the end