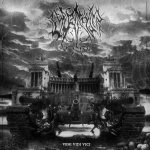 Album rating :  88.3 / 100
Votes :  3
2. Warangel (4:20)
Here it comes, from the horizon, enveloped in black clouds of war, growing from many corpses in flames… a triumphant figure of magnificent form, materializing, it's a sign of war.
A black wing, the face of death, composed by decomposition.
Here it comes the the Warangel, growing from the death, conquers the earth and goes with many deaths… here it comes the the Warangel, coming for us, embracing men with war, taking him from where it comes !
Where is shadow triumphs, earth is squashed by atomic bombs, it's a messenger of war, the bringer of true destiny of mankind !
Is screaming, singing the song of total death, so it goes, the shape of bones is crowing the horizon, all in flames of Hell, now it brings a crown of bullets.