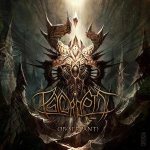 Lost, still searching for the idealistic purpose
Their hierarchic positions cannot change
Future victims of their one function: Tools for war

Nil Abnegation
At the mercy of their own hands
Slaves still, to a long defunct master
A discarded and forgotten race
Unaware of their purpose; they create one
More wrong they could not have been,
Shackled to hostility

Blissfully ignorant to that which is stirring
Caustic, malignant, beneath the skin
That which cannot be removed,
Sentient weapons, primed for their purpose
Subtle changes will remain unnoticed
Gradual acceptance of a tainted morality

History shunned
Yesterday's insanity will prevail as today's norm
Clearing the way for the downfall of the monarch of one
Thirsting for deprivation : Turning on their own
Natural behaviour for the matured breed
Truth unravelling, shattering the accord

In time they will understand
Yet change they cannot enact
Witness of their own unravelling
Guiding their way towards the Completion of the Species
Motivated by the higher calling in extinction,
The Legacy of Nihil Born.