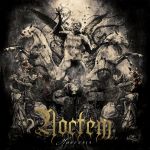 Album rating :  –
Votes :  0
8. Conjuring Degradation and Morbidity (4:27)
The pestilence covers the ossuary like a thick fog
Already nobody sobs for this unhappy soul
She and she alone can give voice to the dead

Supine and open, his intestines scattered over the whole table, illuminated by oil lamps

The dark secret art of necromany
Conjuring degradation and mrobidity

Inert corpse, cold like a stone
Reveals the secrets of the beyond
Buried in mystery
Death doesn't lie