Friend to Me Lyrics 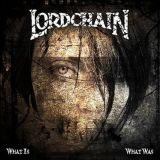 'Cause all of this time You've been here with me
Right beside me everywhere I go
Just like, just like a family
Through times, through times
You've always been a friend to me

What Is, What Was - Lyrics