Year of The Cadaver Race Lyrics 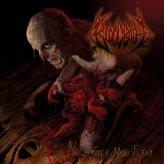 Nations are trampled under four legged flesh
A pounding horde of hollow bodies in sight
They rear their skulls and cry out
Of all those who were killed, all return

Echoes of swine squeals distorting the silence
Reclaiming the loss of meat stolen from their bodies
Chewing and pissing on human remains
Of all those who were slain, all return

Moans and barks coming from the same direction
The human's pets no longer sit at their sides
Primitive instincts, animalistic dogma
Of all those in captivity, now in devious activity

Species without a language of words
Known only for their deeds
A call upon death, death answers quickly
Of all those who're alive, not an animal - not a man