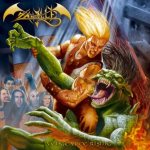 Album rating :  85 / 100
Votes :  1
4. Queen Anne's Revenge (5:11)
He terrorized the eastern waters for three dreadful years
His savagery is legendary, His name has lived on through the ages
Born in the end of the 1600s, his given name was Edward
One look at him would terrify, Black-Beard is what he became known as

Hed hide his ship and lay in waiting for some unsuspecting vessel
Hed attack with such ferocity, No one ever acted so fiercely
He carried three bracers of pistols, had lots of rum for all his men
When things got slow hed stir thing up, By shooting his guns in his dark cabin