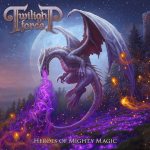 Time is of the essence! I must entrust you with what little I
know before, before I must depart. There may be a time where
our paths cross again, but for now, you must only listen,
and heard

There is...still hope. There are a few that remain. A few who
can still bring order to the chaos, light to dark, turn despair
into glory.

The elder wizards once knew of the prophecies. The are inscribed
in riddles and serpent tongue, in the ancient forgotten
tomes in the deepest of the arcane libraries of Winterreach. I
have seen them with my own eyes!

I tried to decipher the ancient conundrums aid incantations,
I tried so hard! But for every secret that was unravelled before
my eyes, two more shoot at my doorstep.

For what seemed like aeons I worked relentlessly. I was at
the brink of madness many a time, and almost succumbed
to the arcane forces unleashed. One day, I finally found
myself on the verge of unfolding monumental mysteries,
when, when they...

And now, the have abolished me!! The Arcane Tribunal
deemed my studies..wretched and vile! Curse them! Let
the wrath of the Netherrealm be upon their creaking bones!
I have not devoted my life to mundane sorcery to please
cowards and weaklings!

We must proceed with what has begun. The wheels of fate
are already spinning and we cannot bide any longer. We
are on our own, and splendour shall follow in our wake.

So now, hearken. Ever since the order of the Seven Flames
perished, and the Dragon Fathers forgathered in the
Gharad Mountains; they are, albeit mighty beyond mortal
comprehension, the only thing that now stands in the way
of the brooding calamity in Khrond, and the only solace to
the people of the Twilight Kingdoms.
A bleak comfort indeed.

The life force in the Glades of Lithôe are already dwindling,
and the octarine luster in the Forest of Destiny is waning.
I have beheld it, and I have felt it. It will soon be upon us.

The prophecies however, spoke of the crystal bearers.
Chosen heroes of starlight born for the glory of the
Kingdoms. The guardians of man, elf and dwarf,
and the protectors of the realms.

They shall rise when time are dire, and come bearing
arcane light and the wrath of dragons. One hero shall
arise from every kingdom, and with him, a celestial crystal
echoing his name. They are the Twilight Force.

They remain nameless throughout the grimoires and
tomes, and none speak of their whereabouts or origin. I
have searched far and wide, over mountains and seas,
through the voids of magicka and the voices of time, and
finally, I now know. I have seen their visions, and I have
felt their presence.

One is a wood elf. A swift and cunning woodland
ranger with his heart in the trees and his spirit on the seas.
Another is the one rightful heir to the Emerald Throne.
A gallant and mighty warrior on his path to his destiny.
A boy at mind, and a true king at heart.
The third is a venerable forest whisperer, a mystic
herbalist whit the gift of beast speech.
The fourth is a half-elf of clandestine nature. With an
obsidian will and a silent mind, he is the shadow death.
The fifth is an enigma indeed. I had trouble discerning
its life force through my visions. And I was transfixed
by the power of its spirit. I felt surges of malicious
contempt, as well as waves of cosmic insight and
primordial wisdom.
A truly intriguing being of eldritch descent.

And, my friend... I, unbeknownst to me until the last
full moon, is the last crystal bearer. That is why I now,
in the eleventh hour, come to you. I must seek out the
bearers, and the crystals must be unearthed.
And you, must return to fulfil your oaths.

The Knights of Twilight's Might must gather and rise.