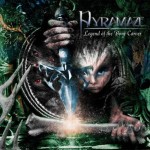 Bring me your fallen heroes and loved ones
And you shall witness the powers that were
Given to me, the powers I brought from another world
Be not afraid, for I will use them to do good

And then it began, I carved the ancient writings
Into the bones of every creature who died by the
Hand of evil, the whispers of a thousand ages would
Roam the air, and the skies turned blood red
As the bones were once again covered by flesh and the life that
Was stolen from them, was now flowing through their veins

Listen to my words, your lives come at a price
Join me in the battle of all ages
We must make our final stand here, now
And crush the wicked before it''s too late

Legend of the Bone Carver - Lyrics